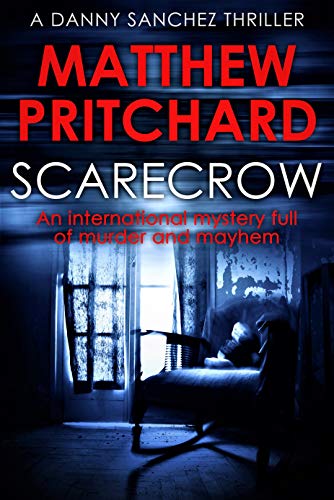 The twists keep on coming in this dramatic thriller! Perfect for fans of David Baldacci, Michael Connelly, Stuart MacBride and Tony Parsons.

If the killer’s been caught, why are people still turning up dead…?

When Danny Sanchez, a hard-bitten journalist working in Spain, is sent to cover the demolition of the home of an expat couple, he lands a much bigger – and grislier – story than he bargained for.

During the demolition, a corpse is discovered, dangling in the depths of the brickwork…

And as Danny delves deeper into the mystery, he finds a trail of bodies that forces him to revisit the first story he ever covered, the trial and conviction of the serial killer known as The Scarecrow.

But with that man behind bars, how can bodies bearing the same distinctive pattern of mutilations be turning up in Spain?

The Spanish police insist there is no connection, but Danny thinks they may be covering something up.

Is this the work of a copycat murderer? Are more victims on the hit list?

Danny needs to catch this depraved killer, before the killer catches him…

SCARECROW is the first book in the Danny Sanchez Thriller series: a hard-boiled, urban mystery with a compelling private investigator, exposing the dark underbelly of southern Spain.

‘A very enjoyable tale of murder and mayhem and piercingly accurate in its portrayal of Brits abroad, in this case, Spain. Hero Danny is very human but the killer is something else: a twisted weirdo with an eye for torture and a knack of making useful friends. Well worth a read.’ - The Sun

‘The twists in here are exceptional – none of this cliché stuff – and you’ll be impressed at how such a complex novel can be both easy to read yet challenging on the mind. I can’t recommend this enough. If you’re looking for a great plot, engaging characters, fast pace and a completely different read to the norm, then make sure you get it on your Christmas list – you won’t be disappointed.’ - Mean Streets: The Home of Crime Fiction

‘A nail-biting murder mystery with a distinct European flavor, steady pacing that leads to an exciting finish, and characters with depth and humor.’ - Books, Bones and Buffy

‘Pritchard scratches the surface of the Spanish paradise, and finds evil lurking beneath.’ – Giles Tremlett, author of Ghosts of Spain

‘I have no idea of whether this is the authors debut novel, but I’m guessing it may well be. If so, I stand and applaud him. I will also find his author page and sign up for notifications of when his next book will be released as I don’t want to miss it. He is that good folks.’ - Hellnotes

‘Pritchard paints the scene so vividly, the true joy of this book isn’t the murder mystery element, but the setting and the life surrounding it. Spain should be a place of sun, sea, sex and sangria, but Pritchard lifts up and exposes the grim underbelly of life in Almeria. This melting pot provides us with a dangerous though beautiful setting.’ - Snakebite Horror